Reckoning with the Vision of God

It was one of those moments of true insight, a penetrating flash of understanding that could change one’s perspective. S 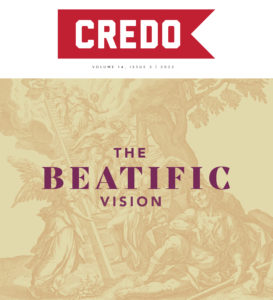 ome seminary colleagues and I were taking part in a roundtable on theology and science. We were gathered for dinner in a pub in Cambridge, Massachusetts. It was a pretty impressive group of scholars, of various disciplines, most of them from the Massachusetts Institute of Technology, one or two from Harvard, several from other colleges and universities in and around Boston.

The conversation drifted to eschatology and the nature of heaven. What will be it like? What will it mean to live eternally in the presence of God? What will we be doing for eternity? Understandably, given the brainpower gathered in the room, most of us were expressing some hope that our work will continue in some sense in heaven. “Surely,” one physicist quipped, “there will be more stuff left to discover.” Nods all around the table. The desire for continuity between the things we love doing now and the nature of our occupation in heaven is surely understandable. The dignity of work had been inculcated in all of us, and most of us assumed that it will continue in heaven. We were too sophisticated for the naïve idea of heaven as a continuous worship service. And yet, we hadn’t reckoned with the most essential thing. It had been staring us in the face, but we couldn’t see it. Once it was pointed out, nothing would ever look the same. “Well, you can just go ask God,” someone said. The domination of an unwitting theological pragmatism makes it hard to swallow such a contemplative pill like the beatific vision. Click To Tweet

Talk about a bucket of cold water dumped on one’s heavenly aspirations. In one swift move, we had all been check-mated. We had been so preoccupied with figuring out what could count as a happy existence in the hereafter that we didn’t account for the most central aspect of that existence – the immediate presence of God. That changes everything. What point will there be to science, when one will share in the knowledge of God, the secrets of the universe within grasp? What need for politics, economics, military? Religion too will become obsolete, and so will sacraments, orders, clergy. Everything will change – can we imagine what that will be like?

The Christian tradition presents the heavenly contemplation of God as the source of our happiness. It thus receives the name “beatific vision.” The disagreement over the nature of the vision should not obscure the consensus among theologians, East and West, over the centrality of the vision in heaven. The end of the Christian life is the eternal and immediate contemplation of God. The domination of an unwitting theological pragmatism makes it hard to swallow such a contemplative pill. We find it increasingly difficult to stop and rest, and just do nothing, to say nothing of prayer or meditation. In the fifteen years that I have been teaching theology in the United States, one of the most common questions I get asked is, “how does this help me in my ministry?” Everything must be evaluated according to measurable learning outcomes. Seminary colleagues will be familiar with this question from the all too pragmatic student course evaluations. We feel the need to justify theological contemplation in some other terms.

It would be presumptuous to speculate too much about the vision. Yet the Scriptures give us a glimpse into three dimensions of the vision. First, the unquenchable desire to see God face to face will be finally fulfilled. During our pilgrimage in this life, such a vision is denied to even the most upright of us. Even Moses, of whom we read that “the Lord used to speak to Moses face to face, as a man speaks to his friend” (Exod. 33:11), still requests to see the “glory” of God and is denied (Exod. 33:18-20). God explains that no one shall see God and live, which does not imply a punishment, but rather a condition of seeing the face of God. Only upon death and being lifted to heaven, will the saints see God, as John explains in the Apocalypse: “They will see his face, and his name will be on their foreheads” (Rev. 22:4). Until then, we only see his works, or, to use the Sinai symbolism, the “back” of God (Exod. 33:23).

What it means to see God, however, is by no means easily imagined. Even the apocalyptic Seer catches but a glimpse, and he doesn’t actually have the beatific vision himself. Even if Paul’s rapture to the third heaven (2 Cor. 12:2-4) were the beatific vision itself, he is still unable to explain it to us, his readers. Thus, while the Bible does stir our imagination about the visio Dei, we must not mistake its descriptions for literal representations. To see God is a really big deal, and it changes everything. Eastern Orthodox theologians deny that a comprehension of God will ever take place. The essence of God remains hidden even in the vision. What the saints see is the shekinah, the uncreated light of God, which some saints glimpse even in this life. Orthodoxy shuns any hint that the essence of God is apprehensible. The essence-energies distinction frames their position.

In the West, under the towering influence of Aquinas, the vision amounts to an immediate intellectual seeing of the essence of God. We will immediately see the essence of God, without the mediation of the works of God. Such an intellectual vision is not a comprehension, as Aquinas is determined to stress. Rather, depending on each person’s capacity for this vision, some will have more, others less, understanding in this vision. This is Aquinas’ explanation for the mansions and rewards in heaven (Jn. 14:2). This is a point of no small importance, because it defines our heavenly happiness entirely in terms of the vision of God.

This excerpt is from the latest issue of Credo Magazine. Read the Full article here!