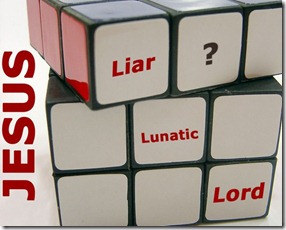 In Matthew chapter 16 Jesus asked his disciples, “Who do people say that I am?” The disciples replied, “Some say John the Baptist; others say Elijah; and still others, Jeremiah or one of the prophets.” “But who do you say I am?” Jesus asked. And so Peter answered, “You are the Christ, the Son of the living God.” Jesus replied, “Blessed are you, Simon son of Jonah, for this was not revealed to you by man, but by my Father in heaven.”

I am sure that when people of Jesus’ day said that they thought he was John the Baptist or Elijah or Jeremiah, they meant to be generous and complimentary. After all, it was an honorable thing to be numbered among the great prophets! Jesus Himself said that John the Baptist was the greatest of the prophets. To be identified with them would be an honor indeed.

Not surprisingly, then, when we ask people today the same question — “Who is Jesus?” — similar answers are often given. Some may say he was a prophet like the other prophets, with some differences perhaps. They may say he was a great teacher. Or they may place him in a respectable category of religious leaders such a Mohammed, Budah, Confucious. We often hear that he was a man like other men — a man with superior qualities in significant areas, of course, but in the final analysis, a man on the level of other men.

What is significant is that these answers, as respectful as they may have seemed, did not satisfy our Lord. Not until Peter acknowledged Jesus as the Divine Messiah was the question answered well enough. “You are the Christ, the Son of the living God!”

In his comments on this passage Matthew Henry observes, simply, that it is entirely possible to have an honorable opinion of the Lord Jesus which is nonetheless wrong — an honorable opinion that is not honorable enough. Not until, like Peter, we acknowledge Jesus’ uniqueness and recognize Him as the Lord from Heaven do we give Him the honor and reverence that is due Him.

Fred Zaspel holds a Ph.D. in historical theology from the Free University of Amsterdam. He is currently a pastor at the Reformed Baptist Church of Franconia, PA. He is also Professor of Systematic Theology at Calvary Baptist Seminary in Lansdale, PA. He is the author of The Theology of B.B. Warfield: A Systematic Summary (Crossway, 2010) and Warfield on the Christian Life: Living in Light of the Gospel (Crossway, 2012).