Can young minds learn about Luther?

The value of Carr’s biography for children

Martin Luther is a hero of mine. Having read Here I Stand and The Bondage of the Will, and being familiar with Lutheran theology, I accepted this review with a twinge of skepticism. I have seen more than one Sunday school syllabus gone horribly wrong; from teaching “sharing” as the moral of Jesus feeding the 5,000 to, ‘I am the vine; you are the branches’ recast in computer, cable, and printer terminology. I half feared to read, “See Luther Translate. Translate Luther, Translate.” Simonetta Carr has dismissed all such concerns with her excellent children’s biography. She conveys the necessary and appropriate historical background, along with the key events of Luther’s life, without overwhelming a young reader with more than he or she can digest. I am indebted to Simonetta Carr for providing a resource of this caliber with which I can introduce Luther to my own children. Most importantly, Carr orients the whole book around Luther’s fixation with justification by faith. In this way, Carr’s Martin Luther (Reformation Heritage, 2016) is a biography of Luther in which Jesus Christ is the central character, and His justification by faith is the narrative crescendo.

Carr gives our children a spoonful of Luther to set their palates for the feast of Luther’s own writings, and of biographers like Bainton and Kolb. While some might have been daunted at identifying and summarizing the hinge pin of Luther’s theology from among his voluminous works, Carr rightly observes the centrality of justification by faith alone: central to the Gospel, central to the Reformation, central to Luther. After all, it was Luther himself  who wrote to his opponent Erasmus, that Erasmus was “the only one to recognize and attack the point upon which all else turns.”

Moreover, Carr relates how deeply Luther understood the Catholic theology of his day: a system designed to heal the wound lightly saying, “Peace, Peace” when there is no peace. While relics, indulgences, confessional, and Hail Marys were part of an elaborate and intricate system which made many feel better about themselves, Luther saw that these things could never bring us peace with the Almighty and Righteous God. Even his early years of access to the Bible made him feel worse, more acutely aware of his sin and guilt, not better. We would do well to remember and remind our children that Jesus will make His saints despair of themselves to hope in him; a timely theme for us in an age when Jesus is preached as cuddly and fuzzy and feel-good.

Pulling no punches, Carr relates accurately that Luther hated, “That phrase— the Righteousness of God,” and was angry at God who required this righteousness of him. Luther would not, could not, be distracted by the trinkets and baubles of Roman manufacture. Only the Scripture could teach Luther that God gives the righteousness he requires through Jesus Christ. Luther finally saw that the whole idea of Christianity and peace with God rested upon, “the righteous shall live by faith.” Justification by faith was central in the narrative of Luther’s life, because it was central to the Gospel.

Carr presents children with a true hero of the faith, when in the drama of the Diet of Worms, Luther defies the Roman authorities at risk to his own life, lecturing them on theology and conscience, rather than recanting God’s gospel of justification by faith.

As Luther could be crass, Carr also rightly relates some of his imperfections, but without excusing them, and without dragging our children through the specific improprieties of his language.

Children will learn that Luther, like all others was an imperfect hero, justified by faith; a man to emulate, but not to idolize.

Carr’s Martin Luther also introduces our children to such other magnificent brothers as Fredrick the Wise, Phillip Melanchthon, and Albrecht Durer. In my own life, I want to emulate Prince Fredrick, and to set him before my children; Fredrick risked his own reputation and safety to protect Luther from the Roman Church, as well as renounced his own ‘valuable’ relics because the gospel taught him they are worthless to God.

Finally, Carr’s appendicular “Did you Know?” section whets the appetite of young readers for Luther biographies and theologies they will read as they mature. Her inclusion of Luther’s Catechism on The Apostles’ Creed is an excellent selection which reinforces with the book’s final words the message of justification by faith alone. “I believe that by my own understanding or strength I cannot believe in Jesus Christ my LORD or come to know Him, but instead the Holy Spirit has called me through the gospel… This is most certainly true.” 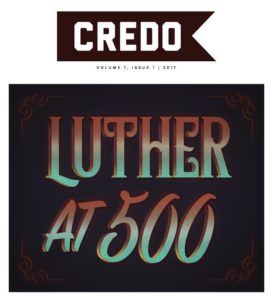