A Biblical, Creedal, and Confessional Exposition of the Apostles' Creed xposition of the Apostles’ Creed (Reformation Heritage) is a collection of sermons he preached on the basic articles of the Christian faith. It serves as a reminder that the Reformed tradition did not see itself as separate from the universal church, though it was principally opposed to Rome. Rather, Olevianus and his tradition argue for a Reformed catholicity rooted in the ancient confession of the church.

This new translation by Lyle D. Bierma, along with R. Scott Clark’s historical introduction, will benefit both scholarly and general readers. Charged with federal language, An Exposition explains the Christian faith as the believer’s fellowship with God in the covenant of grace. Thus, it is significant for its contribution to the development of Reformed covenantal theology. In addition to exhibiting its historical value within the Reformed tradition, readers will be “directed,” as Olevianus had intended, “toward edification in true and sound piety.”

The following excerpt is taken from the introduction, by R. Scott Clark.

It should be observed that Olevianus was not only a biblical and creedal theologian, but also a confessional theologian. Despite all the attention that has been paid to Olevianus’s relation to the Heidelberg Catechism since before its tercentenary (1863), the significance of that relation or the character of the rest of his work has not always been considered in toto. Though he worked with Scripture as a biblical commentator and as a theologian, and though he quoted Scripture in his catechetical, homiletical, and creedal works, and even used proof texts frequently, especially in the creedal and catechetical works, he was not a biblicist. Though he was fervent in his piety — so much so that, had he lived and written in the British Isles in the same period, he would certainly have come to be known as a “Puritan”— and precise in his theology, so that he was among the early Reformed orthodox (1540–1640), neither of these traits is adequate to describe his theology, piety, and practice.

The Creed and the Kingdom

As Olevianus explained in the preface to the elector, he had two goals for his Expositio: first, to record for his students his sermons on the creed, and second, to re-state the Reformed “doctrinal testimony” against the Roman criticisms of the Reformed faith. He specifically sought to defend the antiquity and catholicity of the Reformed faith.

In this work, then, Olevianus presented the Christian faith in parallel, complementary categories of covenant and kingdom. The “Articles of the Faith” contain a summary of the doctrine Christ the King gave to His apostles. The creed teaches us how to become citizens of Christ’s kingdom: repent and believe in Christ and enjoy fellowship with Christ the King.He specifically sought to defend the antiquity and catholicity of the Reformed faith. Click To Tweet

This eschatological kingdom that has broken into history is the culmination of the typological revelation in the Hebrew Scriptures and the history of redemption that pointed to Christ. The foedus novum is the universa administratio of the regnum Christi. This universality (or catholicity) of the church in the new covenant is in contrast to the administration of the kingdom under the typological period of redemptive history. Here, as he often did, Olevianus appealed to the promise of Jeremiah 31:32–34. With Calvin, Heinrich Bullinger, Martin Bucer, and the rest of the major Reformed theologians of the period, Olevianus rejected the Anabaptist bifurcation of the covenant of grace. The covenant of grace is fundamentally unified by the divine promise, but this unity did not obliterate the distinction between Abraham and Moses or between the old and new covenants. For Olevianus, as for the rest of the Reformed in the period, the old covenant was the Mosaic covenant, the national, temporary, typological covenant that God made with national Israel. Because, however, “they rendered that covenant void”, God has made a new covenant, with a new high priest, Christ, and has forgiven our sins (justification) and written the law on our hearts (sanctification). Unlike the Anabaptists (and their successors in modern evangelicalism), for Olevianus, the new covenant is not a radically new principle relative to every epoch in the prior history of redemption. It is eschatological, but not so utterly that the visible church within which it is administered can be completely pure or completely eschatological. For Olevianus, the new covenant remains an expression of the Abrahamic covenant — albeit an administration after the fulfillment of the seed promised to Abraham—and the promises made therein to believers and their children continue to be in force. What has changed is the administration of the promise, not the promise itself.

In this work, one finds all of the major themes and threads of Olevianus’s covenant (federal), catholic theology. One finds a churchly and sacramental theology of the kingdom of God, and thoroughly evangelical or confessional Protestant doctrines of Scripture (sola Scriptura) and of justification and sanctification. It was the aim of Olevianus’s covenant theology to express in redemptive-historical terms the same theology he taught under the various heads of doctrine as arranged by the creed. The substance of the faith remained the same, whether expressed relative to the promise-fulfillment scheme or relative to the creedal scheme. He was always an “evangelical” in the sixteenth-century sense of that adjective. He was devoted to the gospel of justification by grace alone through faith alone in Christ alone. As a sixteenth-century evangelical, he distinguished law and gospel as two distinct principles. His covenant theology was intended to provide a stable place for and stable relations between the doctrines of justification and sanctification. For Olevianus, as for the mainstream of Reformed orthodoxy, sanctification was said to be the natural and necessary consequence of the gospel of free acceptance by God. For Olevianus, we are justified freely, but we are justified in order that we might be sanctified; we are never said to be sanctified in order that we might be justified. So the structure, nature, and purpose of his covenant theology was thoroughly evangelical or Protestant. In these convictions, he saw himself as Luther’s heir, as Calvin’s heir, and as a preacher to the Germans and to his students in Heidelberg and Herborn who came from across Europe and the British Isles to study. 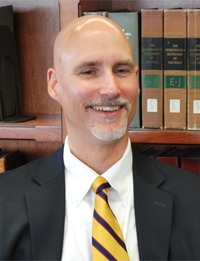 Dr. R. Scott Clark (DPhil Oxford University) was a minister in the Reformed Church in the United States (1988–1998) and has been a minister in the United Reformed Churches in North America since 1998. He has taught church history and historical theology since 1995 at Wheaton College, Reformed Theological Seminary, Jackson,  Concordia University, Irvine, and Westminster Seminary California. He is the author of Recovering the Reformed Confession: Our Theology, Piety, and Practice and Caspar Olevian and the Substance of the Covenant: The Double Benefit of Christ.